I've been planning to do this post for a long time already, but now it is finally here. A post where I show you guys my dear autographs that I've collected over the last few years from celebrities. I've collected them all in personal, which makes them so much more special for myself. The craziness started in 2011 when I visited my first premiere and first convention. (If you click on the pictures they'll enlarge. They are all photos from photos so some of the quality might have gone lost.) 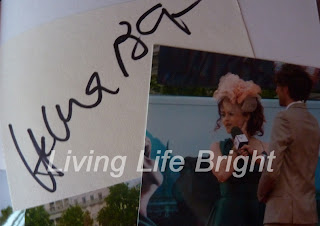 My very first celebrity autograph and from no-one less than Helena Bonham-Carter. I got my notebook signed during the final London premiere of Harry Potter. I slept at Trafalgar Square for one night with friends in order to actually have a spot alongside the red carpet. We got pretty close to it, but me and a few friends stayed back at the fountains instead of mingeling amongst all the pushing people at 5 o'clock in the morning. I know a few people who actually managed to get about 10 autographs, but that wasn't worth it for me as I actually wanted to enjoy everything as well and we had an amazing view from where we stood. 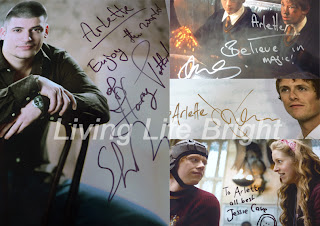 That same week I went to the London Film and Comic Con (2011), which was my very first convention. We went for the Harry Potter/Twilight actors. Left Stanislav Ianevski (Harry Potter), right top Devon Murray (Harry Potter), right middle Charlie Bewley (Twilight) and right bottom Jessie Cave (Harry Potter). I still can go giddy over seeing these autographs. I love how Devon and Stanislav wrote a Harry Potter like message along with it. Meeting Charlie Bewley was quite extraordinary. He was the first one that day that we've met and there was no row at all! Me and my friend were all nervous going up to him, cause back then we were massive Twilight fans, but he was so  nice and there was no reason at all to be nervous about it. We talked for quite a few minutes with him about really random topics (living with your parents, surfing vs sitting at a desk at the convention), it was awesome. Funny fact: back then I adored the autograph cause I was such a fan of Twilight, by now I adore it cause he did such an amazing job in 'Like Crazy' and 'The Vampire Diaries'. 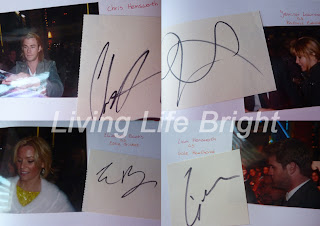 Last year (2012) when I was in London for my internship I decided to pay a visit to the Hunger Games premiere. I was actually quite lucky, because I arrived only 3 hours before it started due to work and I went home with 4 out of 6 autographs. Left top Chris Hemsworth (Thor), Jennifer Lawrence (Hunger Games) right top, left bottom Elizabeth Banks (Hunger Games) and right bottom Liam Hemsworth (Hunger Games). The two I missed out on (of the Hunger Games actors) were Toby Jones and Josh Hutcherson, but I did see both pass by. 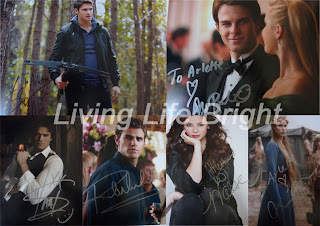 I guess I can count this as my very first large convention, at least one that was dedicated to one topic. In june (2012) I attended Insurgence4 in Birmingham. I'll try to keep this part short, cause if you guys let me I'll ramble on for hours about this experience. It was a full weekend of guest talks, photoshoots and autographs. The autographs above are Steven R. Mcqueen, Nathaniel Buzolic, Ian Somerhalder, Paul Wesley, Malese Jow and Claire Holt. Honestly, this was really, really awesome and this year I'm attending a likewise convention from the same organisers, but then in Germany. I'll blog about it soon and I'll definately blog about it once I'm back! 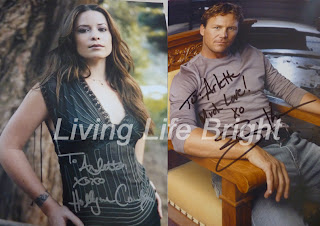 My last convention so far was the London Film and Comic Con 2012. Most of the guests were (fairly) unknown for me, but I had to get autograhps of Holly Marie Combs and Brian Krause, childhood Charmed memories! I got a picture with Holly at the signing table as well, but unfortunately not with Brian because it was too busy. However the friend I was with managed to capture the moment on her camera where he gave me a hug, so that's pretty awesome too!

This is as far as my autographs go at the moment, like I said I'll be attending another convention this year so I'll be able to extend my collection even further. I kept the descriptions of the events quite short (or I tried to), but if you would like to know some more about any of the events, let me know!