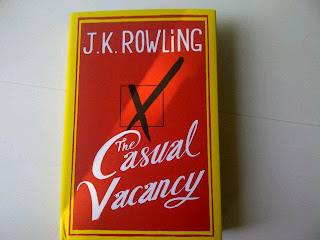 When Barry Fairbrother dies in his early forties, the town of Pagford is left in shock.

Pagford is, seemingly, an English idyll, with a cobbled market square and an ancient abbey, but what lies behind the pretty façade is a town at war.

And the empty seat left by Barry on the parish council soon becomes the catalyst for the biggest war the town has yet seen. Who will triumph in an election fraught with passion, duplicity and unexpected revelations?

Without knowing exactly what the book was about, I was really excited to start reading it. Why? Because it is written by J.K. Rowling and her writing of the Harry Potter books has been flawless. I was aware beforehand that it was an adult book so it would be totally different from what I've read before (from her, but also quite in general).

The beginning of the book inroduces you to so many different characters, that my head spinned a little. It was hard to remember who was family of whom again and which story belonged to which character. Some of the stories stood out to me from the beginning, others seemed to be less intresting. It went on like this for quite a while and I started to loose my intrest for a little. Not because of her writing, because the descriptions were great, but I started to doubt if it the book maybe just wasn't my cup of tea.

I read on anyway, and I'm really glad I did. About halfway through the book the story really started to develop and I was sucked into the world of this tiny town that hid so many different stories of which you are quite aware, actually happen in the world.

By the end of the book I was a brawling kid, and wished the book hadn't finished here. I would give it 4 out of 5 stars, that one single star missing because it took me so long to get sucked into the book. Nonetheless, I would say give it a try, it is really good once you are captivated by it!
Posted by Unknown at 16:16