Book Review #3 The Name of the Star by Maureen Johnson

As I mentioned in my previews blog, I'm a little behind on my reviews, so here is a new one. The book is The Name of the Star and it's written by Maureen Johnson. I had the honour of meeting her this spring at a Q&A with Cassandra Clare in London and well, Maureen is pretty awesome. She has maybe a bit too much of energy sometimes, ghehe, but she got me so excited about her book during the talk that there was no way I was going to go home without a book of her. Talking with others around me while we were in the queue, I got told that this one was the best of her work, so I decided to buy it and I haven't regret that for a second since I started reading the book. 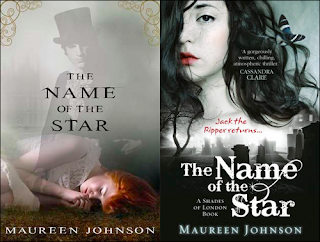 I have the British cover, which is the right one

The day Louisiana teenager Rory Deveaux arrives in London marks a memorable occasion. For Rory, it’s the start of a new life at a London boarding school. But for many, this will be remembered as the day a series of brutal murders broke out across the city, gruesome crimes mimicking the horrific Jack the Ripper events of more than a century ago.
Soon “Rippermania” takes hold of modern-day London, and the police are left with few leads and no witnesses. Except one. Rory spotted the man police believe to be the prime suspect. But she is the only one who saw him. Even her roommate, who was walking with her at the time, didn’t notice the mysterious man. So why can only Rory see him? And more urgently, why has Rory become his next target?

I don't read a lot of thriller like books at all, I've only read a few, which seems nothing in comparison to the amount of books I've read over all. Though there are some grusome moments in the book (as you might expect with a book that is based on the Jack the Ripper murders), it isn't fully thriller material. There is enough fun, romance and some paranormal twists as well (that I didn't see coming at all, but really liked).


Maureen has an amazing way of writing. The book is from the perspective from an American teenager who comes to London and I just loved how you explore London and its culture along with her. As a non-Brit I have been grinning like a mad girl now and then when I recognized those typical things of the British culture that I wasn't used to myself.

Like said, there is a paranormal twist in it, which made it even more intresting to me, as it lifts the "just a thriller book" idea of it, but you will have to figure out for yourself what that twist is.
Posted by Unknown at 12:29