A must see for everyone: Ben Hur 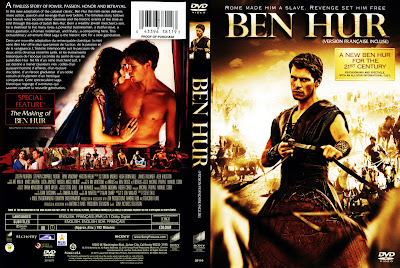 Ben Hur is a gut-wrenching, action-packed drama about the struggle between the Roman Empire and its occupied territory, Judaea. Two lifelong friends, Ben Hur and Messala, are caught in an awful moment of history that puts them on opposite sides of a war for Judaea’s national identity - and tests their characters to the maximum.

Those who know me a little and recognize him from the DVD cover above, will know why I initially have watched Ben Hur, but believe me there is more to it.

I watched the Mini Serie of Ben Hur somewhere during my internship in London last year, after Annelie recommended it to me. And recently I've watched it again. Like I said, the first reason for me to watch, was that the lead role is for Joseph Morgan and as a fan of his acting I was curious to see it. I have to admit, Joseph did an amazing job in playing Judah Ben Hur. He played out the passion, loss, pain, revange, love, the many emotions that come by in a very touching way. Further also a lot of praise for Emily VanCamp and Ray Winstone in particular, but for the other actors as well.

For those who might wonder if it is to cruel to watch, I thought it wasn't and I can't stand cruelty all too well. The scenes are there yes, but they are either screened in such a way that you don't actually see it or it isn't put out there in such a detail, however, still the cruelty of what was going on in the Roman Empire is still there. It didn't comprise on making it prettier than it was.

The only real minor point for me was the ending, I won't go into detail why that was dissapointing you will have to see it for yourself, but that was the only thing that didn't do it for me. Furthermore, beautiful and haunting story at the same time and portraited by amazing actors.

Did anyone of you see it before or is planning on seeing it some time?